A community run basketball club’s new women’s team has been helping play a key role in efforts to grow and expand opportunities across the area. This season, for the first time, Derby Trailblazers launched an elite women’s team, which plays in National League Division 2.

The elite team is being supported by industry-leading Dains Accountants, based at Charlotte House, Wyvern Business Park, and nearly capped the debut year in a perfect manner, just falling short of winning the WNBL D2 Championship after being edged out by Nottingham Trent University.

However, the success of the team did not go unrewarded as coach Leanne Chandler was named North Conference Coach of the Year at the Basketball England awards. 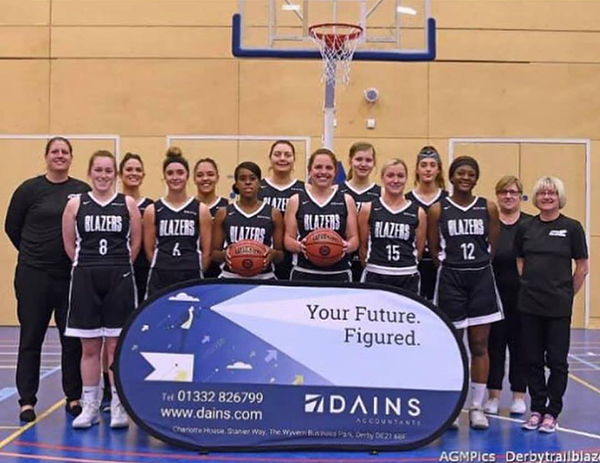 Lisa Richards, Dains Partner, said: “We have been so pleased to lend our support to the Trailblazers and are all so proud of their impressive first year.

“But our work with the team is more about what happens on the court. Working with the Trailblazers is about supporting and promoting sporting women and their success.

“In recent years, there has been a big push to promote physical activity in girls and women, and for women to participate in team sports. This has resulted in success on a national level in sports ranging from hockey to football and also right here in Derby with the pioneering Trailblazers.

“We cannot wait to continue to work with the team to inspire young women to continue sport and see it as an integral part of their life. This will sit hand in hand with continued growth for women when it comes to work and business. This is why Dains and Derby Trailblazers elite women’s team is a perfect match both on and off the court.”

Derby Trailblazers, which is based out of the Noel Baker Academy, was formed in 2000 and has since grown to offer opportunities to everyone from boys at junior levels to women in the National Basketball League.

Now, the club wants to continue its effort to grow by giving people of all ages and from all backgrounds the chance to develop their skills and interests in playing, coaching, officiating and administration.

Club Chairman David Woodyatt said: “This team is the culmination of our clubs rapidly growing female basketball programme. It provides the next stage for our girls and academy players to develop and play alongside our elite women in our national team.

“We are looking forward to working together with our sponsor Dains to promote women’s sport in the city and across the country over the coming years after having a great debut season.

“We are proud to be a community club run by volunteers and we are now urging people to help us spread word about what we are doing and become part of a friendly club that puts the interest of its members first.”

Anyone interested in becoming involved with Derby Trailblazers can find out more information by visiting www.derbytrailblazers.com