Up to 100 professionals attended the networking session, which gives women from across Birmingham and the surrounding area an environment where they can meet informally with like-minded business individuals.

The Dains Accountants Cake Club has grown considerably since it was established in 2014 and regular events at the company’s Birmingham office on Colmore Row in the heart of Birmingham have been well attended.

The event raised over £1,000 for SIFA Fireside, the Birmingham office’s chosen charity this year. 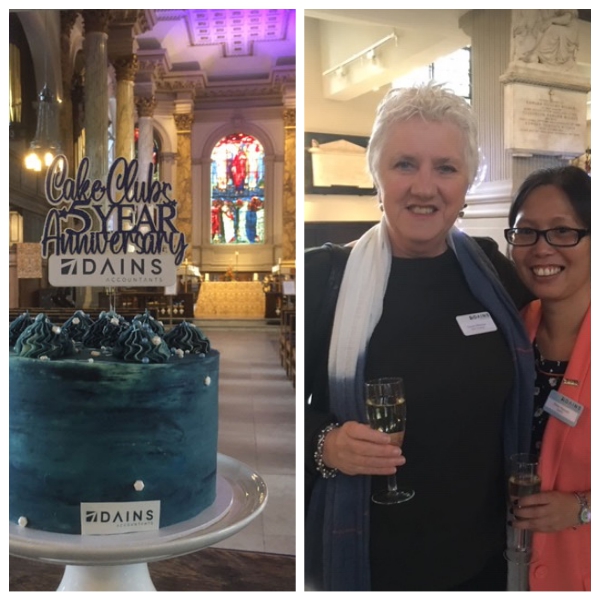 Divine Beauty is a project that aims to restore and celebrate the stained glass windows at Birmingham Cathedral.

Designed by Edward Burne-Jones and made in the workshop of William Morris, the stained glass windows are a wonderful example of Pre-Raphaelite art.

A Dains themed cake celebrating the five year anniversary took pride of place at the event along with dozens of other tasty treats.

Local businesses donated a series of prizes towards the raffle which was drawn at the end of the event and included a round of golf for a fourball at Branston Golf and Country Club, a gift voucher for dinner at Andersons Bar & Grill and gifts from Clarins Spa, House of Fraser and Cake Spa.

Hoan Nguyen, Forensic Accountancy Senior Manager at Dains, co-ordinated the event and was delighted with the turnout.

Hoan said: “We wanted to celebrate our five year Cake Club anniversary by doing something special and we were thrilled to host it at Birmingham Cathedral which is a wonderful venue and a stone’s throw from our Birmingham office.

“The Cake Club has become a key fixture in the diary for lady professionals across the Birmingham area and it has gone from strength-to-strength since it was first launched.

“We look forward to hosting many more cake clubs in the future and giving women professionals the opportunity to network and share ideas away from their workplace in a social environment.”

Dains Accountants is heavily involved with local charities and SIFA Fireside is the Birmingham office’s chosen charity this year.

SIFA Fireside provides a range of services for the homeless in Birmingham including emergency accommodation, clothing, food, housing advice and much more.

Liz Wood, Head of Communications at Birmingham Cathedral, said it had been a joy to welcome the Dains team to the Grade 1 listed building.

Liz said: “More and more companies are using iconic spaces in the heart of the city, such as the cathedral, to create a stunning backdrop for dinners and networking events.

“Congratulations to Dains for holding the Cake Club for five years and raising much needed funds for such a worthwhile charity. The October event was a delight.”