Coventry launches its year as UK City of Culture with the release of a George Eliot-inspired film, featuring a new track by Coolie

Today, 15 May 2021, Coventry marks the beginning of its year as UK City of Culture with the premiere of a new film, TIMELESS WORDS MADE NEW. The film takes inspiration from the words of George Eliot, who lived in the city, setting her words to a new music track specially created for the film by one of the city’s hottest talents, Coolie. It will be released at 20:21, reflecting the year, on the City of Culture website. 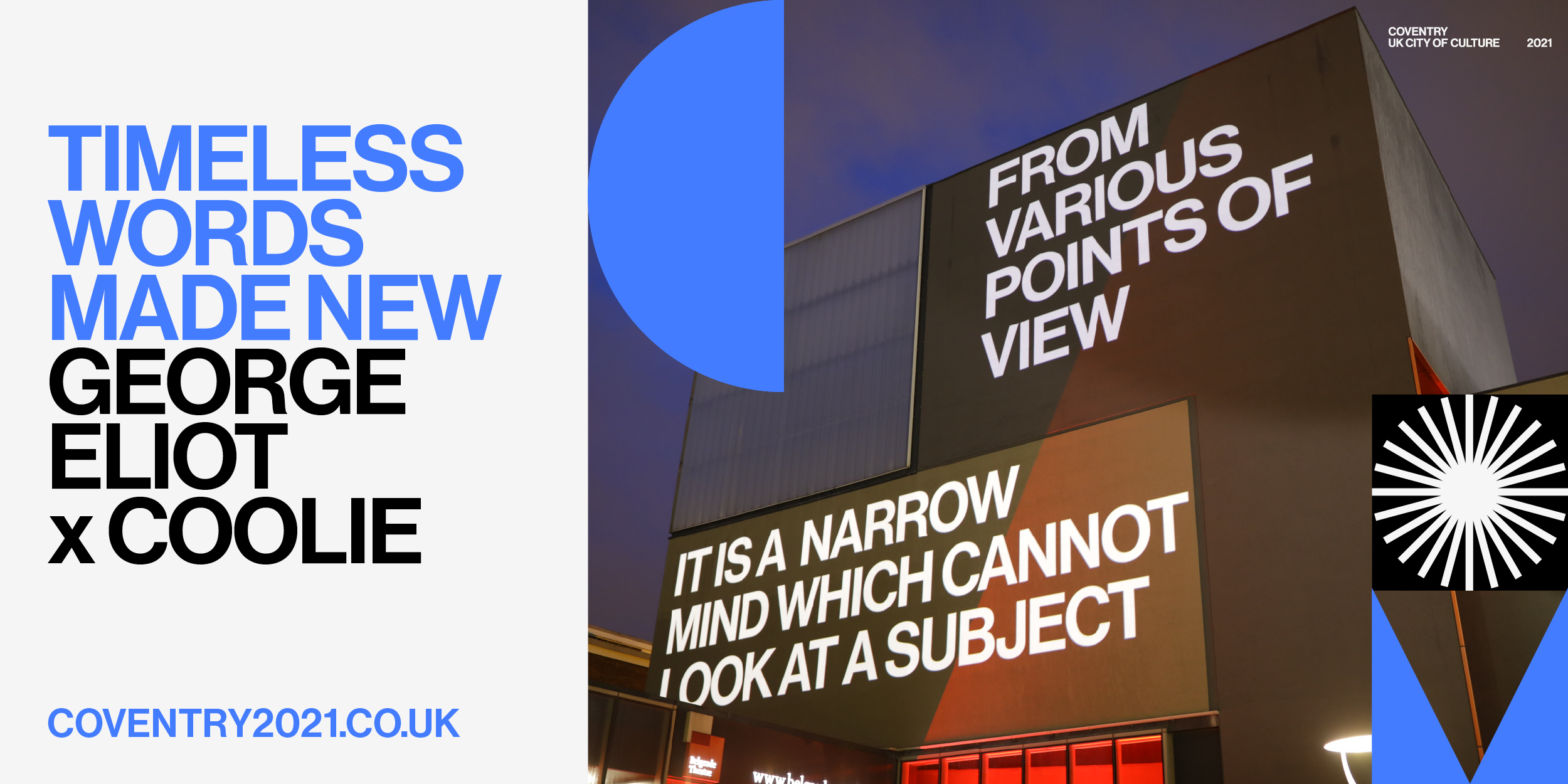 Coolie is one on the pioneers of the booming Coventry music scene, known for his work with other Coventry artists including Jay1. The film is commissioned by Coventry UK City of Culture Trust and created by Uncommon Creative Studio and Untold Productions.

The film takes us on a journey around the city led by Coolie, highlighting what being a City of Culture means to him, in a city he feels has often been overlooked. As George Elliot’s timeless words are projected onto Coventry’s iconic mid-Century cityscape, Coolie takes the viewer on a personal tour of his city as it as it emerges from the challenges of the past year to be UK City of Culture.

Throughout the film Eliot’s observations on life and art are projected on the buildings of Coventry, while well-known people from the city speak their words. The quotes were selected for their relevance after a year in which people have been isolated, communities have been challenged and young people have been particularly hard hit.

“It is always fatal to have music or poetry interrupted.”

“It will never rain roses: when we want to have more roses, we must plant more roses.”

“Our deeds determine us, as much as we determine our deeds”

“It is a narrow mind which cannot look at a subject from various points of view.”

Noting the positivity and forward looking attitude of Coventry, the words are riffed on and reimagined to consider what tomorrow brings, both across Coventry’s year as UK City of Culture and more widely.

The film will go live at 20:21 and is viewable at the City of Culture website and across social media channels.

Mary Ann Evans, writing under the pseudonym George Eliot so her work could be taken ‘more seriously’ was the acclaimed writer of Middlemarch (1871), which is said to be a fictionalised version of Victorian Coventry. She lived at Bird Grove House in Coventry in her formative 20s in the 1840s, and was earlier schooled in the city.

Coolie’s music and the sound he has pioneered has received critical and commercial acclaim.  With the profile of this movement and Coolie’s music now reaching a global wider audience, he’s passionate about celebrating his roots and elevating the status of the city.

“TIMELESS WORDS MADE NEW will put the words of one of our amazing women at the centre of the emotional and cultural renewal of our nation.

This dynamic film and its compelling soundtrack, speak to who we are as a city, putting our powerful social history at the centre of our future.

It marks the start of what will be an incredible year for Coventry and the re-start of our cultural lives."

“Coventry City of Culture Trust approached me with an idea about breathing new life into the words of George Eliot, which feel really poignant to remember as we come out of lockdown and celebrate the opening of City of Culture.

We used her quotes about music, poetry, determination, and resilience. They are as relevant today as they were back when she was writing in Victorian England, but we wanted to present them in a way that was more accessible for today - so I mixed them in a drill track, and we’re using the city as a canvas too for projections.”

Coventry, the city that moves, is known around the world as a city of invention and reinvention. From its rebuilding after WWII, when its city centre was destroyed in the blitz, it has become a symbol of resilience and rebirth. It has been at the heart of several musical pioneers and movements, from Delia Derbyshire to 2Tone and rave and house. Celebrating the city’s youthfulness, diversity and the role that women have played in creating the city it is today are all major themes of its year as UK City of Culture.

The launch of the UK City of Culture year was delayed until today due to the outbreak of Coronavirus. A major signature event – Coventry Moves – will take place on Saturday 5 June. Experienced across the nation through a major partnership with the BBC and extensive broadcast, online and social media content, Coventry Moves will tell the story of the city’s pioneering past, present and future throughout the day.